Duchenne muscular dystrophy (DMD) is the most common type of muscular dystrophy, which is characterised by muscle weakening and breakdown. It is a devastating disease that we still don’t fully understand, and currently there is no cure. Patients have a very limited number of therapy options. Scientists are working hard to develop new treatment therapies, but they still face many challenges.

DMD is caused by a defect dystrophin gene. Dystrophin is a protein that can be found in muscles that are attached to the skeleton, as well as in the heart and the brain. It acts like a muscular shock absorber, thereby increasing the strength of a muscle fibre. Dystrophin stabilises the muscle fibres, in particular when they contract. Without dystrophin, muscle fibres are more fragile and more prone to damages and inflammation. This chronic stress can lead to premature death of muscle fibres, which are then replaced by fat and scar tissue (fibrosis). The precise mechanisms of how the lack of dystrophin leads to loss of muscle fibres remains unclear. 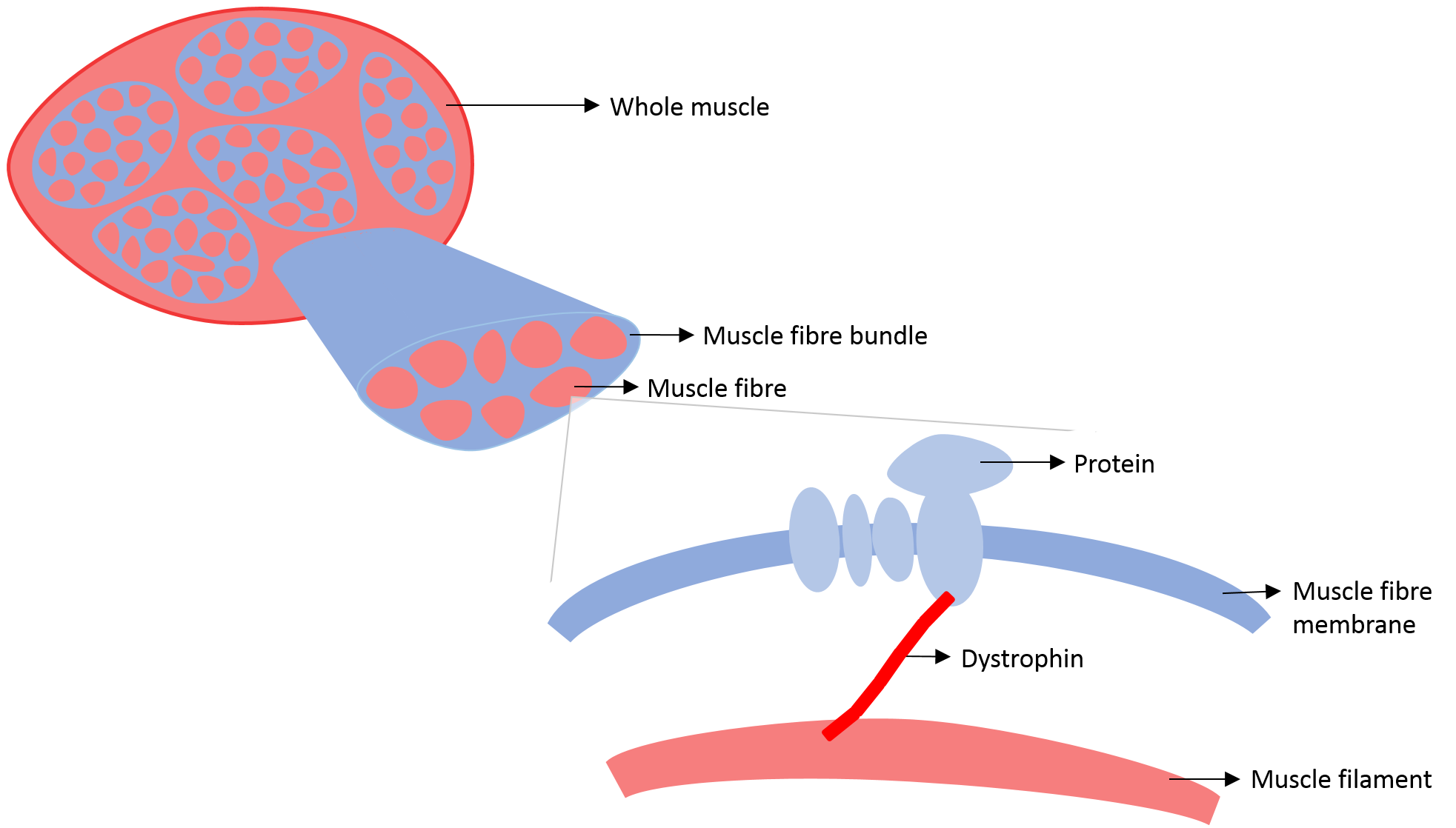 DMD affects one in 3500 boys/men and a diagnosis is often made when the first symptoms appear (3–5 years of age). DMD is characterised by muscle wasting and weakness, which progresses very quickly. The symptoms of DMD may differ depending on the degree of severity. Untreated patients will usually need to use a wheelchair by the age of 12 and die in their 20s; however, with treatment many patients live to the age of 30–40 years. Most patients die due to cardiac or respiratory problems. 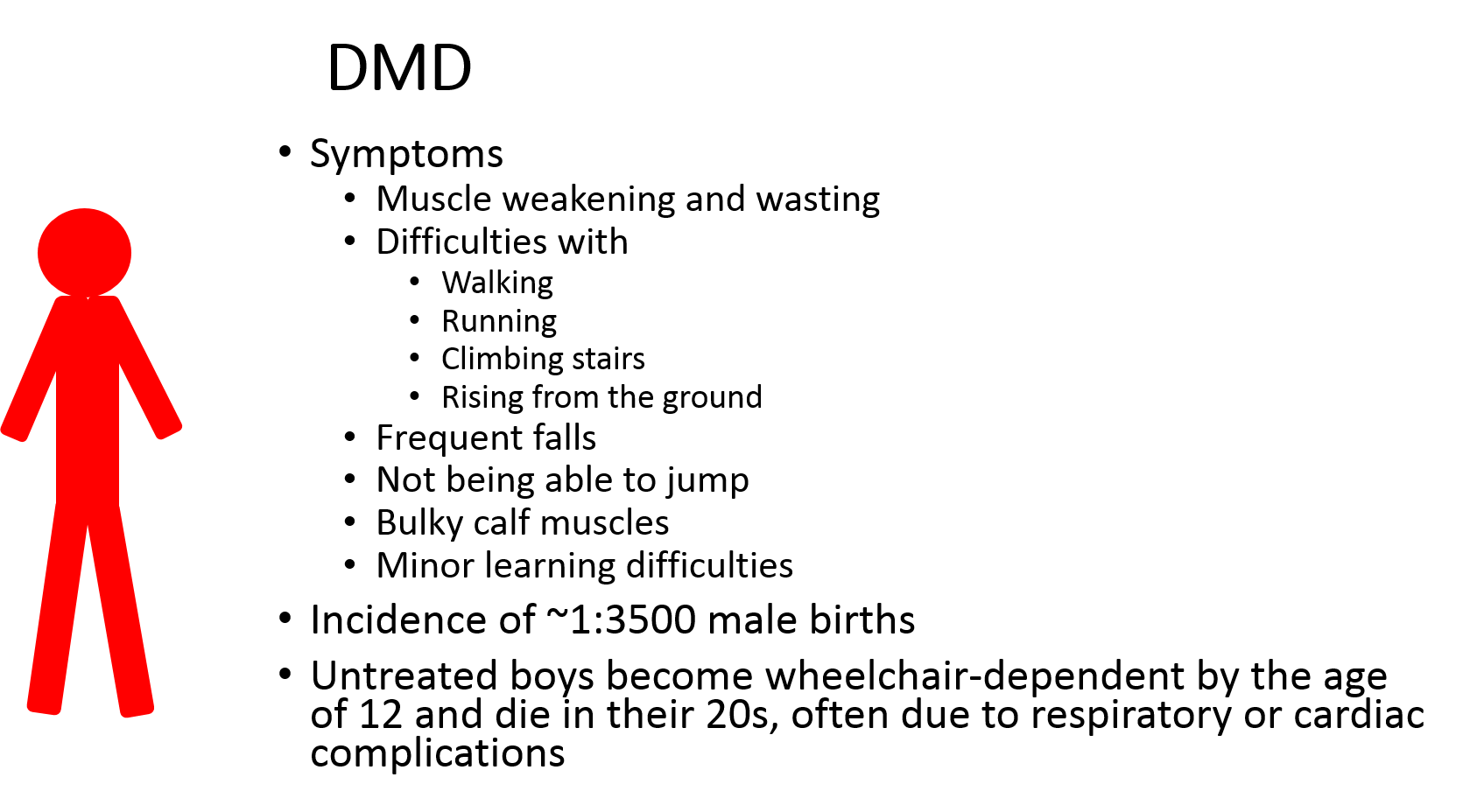 Approximately one-third of patients with DMD develop cognitive and behavioural problems, such as difficulties with language learning, emotional control, adapting to changing situations and decision-making.

Dystrophin is the largest gene described in humans and, due to its length, it is highly vulnerable to mutations. Scientists have been able to categorise the most common variations of a defect dystrophin gene according to mutation type:

Patients with DMD develop the disease either by inheriting a faulty gene or by developing a spontaneous mutation in the dystrophin gene during early embryonic development. 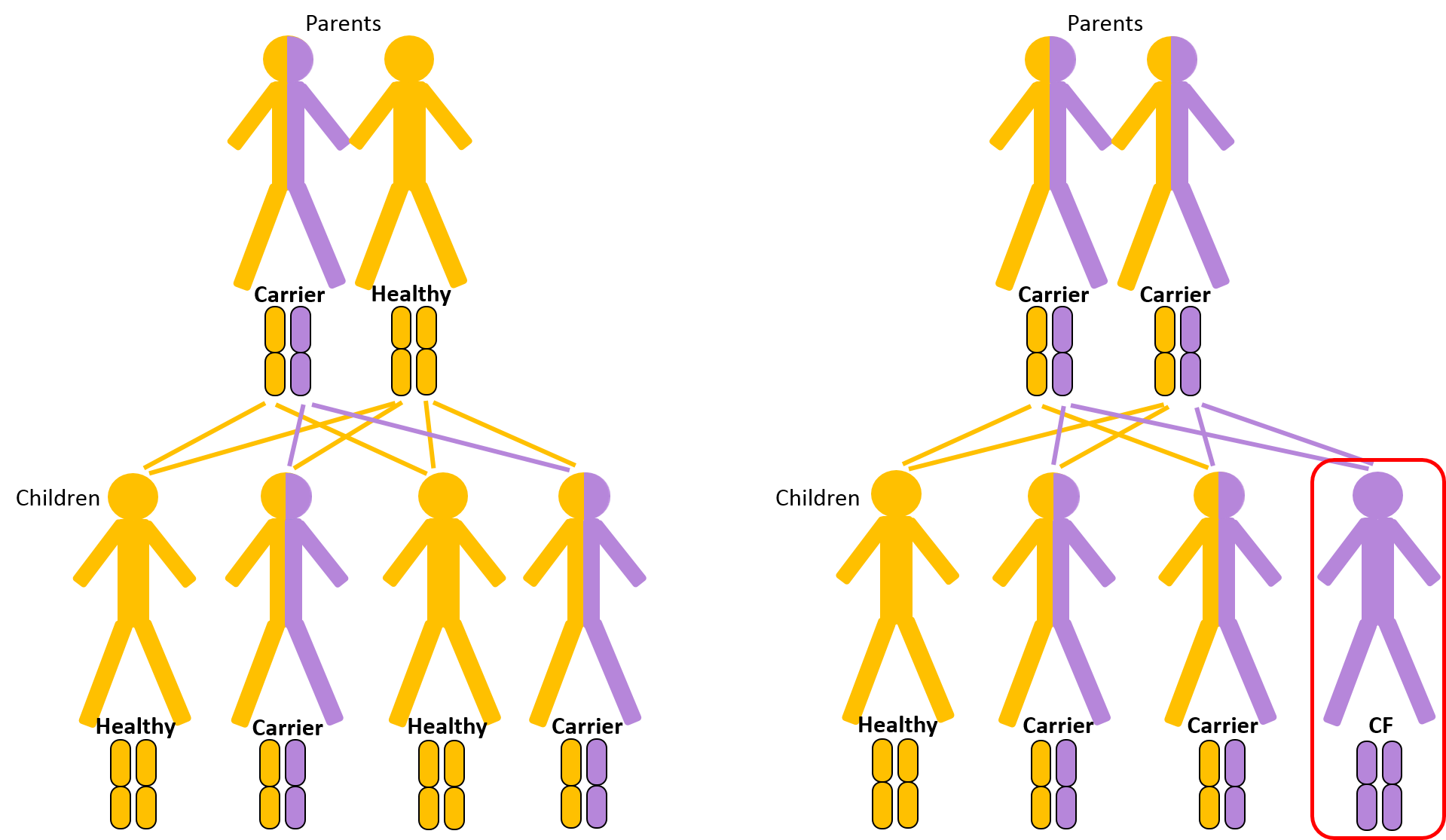 There is a small number of female carriers who develop symptoms of DMD. They are therefore called manifesting carriers.

Current and future therapies for DMD

Currently there is no cure for DMD, and most available therapies provide treatment by managing the symptoms of the disease. In addition, patients with DMD usually require multiple surgeries, for example for muscle biopsies, foot surgery, insertion of a feeding tube, or to correct spinal curvature.

As standard therapy, corticosteroids are used to slow down the progression of DMD in patients from 4–6 years of age. The precise mechanisms of corticosteroids are unknown; however, they have been shown to improve the quality of life of patients due to their anti-inflammatory effects, by increasing muscle fibre strength and improving heart function. However, patients must take them every day, which is often associated with adverse effects such as weight gain, bone fractures and cataracts. The choice of corticosteroid depends on availability, costs and adverse effects.

Scientists have tried to increase the number of muscle fibres in the body with different types of therapies, such as injection of muscle or stem cells.

It is suggested that dystrophin levels of 30–60% might preserve muscle function. Therefore, additional therapies aim to treat DMD by restoring dystrophin at a cellular level. These therapies are at different stages of drug development.

Within the last few years, scientists have made vital progress in understanding the mechanisms of DMD and have developed therapies that have shown initial positive results. Most of these therapies are still at early stages and require further in-depth research. Therefore, scientists still face the challenge of finding a therapy that helps all patients with DMD.

Prime Global 5 June, 2020
It was great to learn more about our brilliant team members in our US offices in our catch up with Ana. Ana talks about how she has always been interested in HR, is passionate about team spirit and how she is central to bringing people together in her role. We are so pleased to have Ana as part of our family! END_OF_DOCUMENT_TOKEN_TO_BE_REPLACED
Interview, News, Prime careers, med comms, medcomms, Medical Communications, Recruitment
Prime GlobalAn interview with Ana Agudelo, Global HR Business Partner at Prime Global06.05.2020