Viral hepatitis is estimated to be responsible for 1.4 million deaths per year, either due to acute infection or hepatitis-related complications, according to the World Health Organization (WHO). The number of deaths is comparable to those caused by human immunodeficiency virus (HIV) and tuberculosis. This article summarises the characteristics of the five different types of viral hepatitis.

Hepatitis – What is it?

Hepatitis means inflammation of the liver. It is most commonly a result of a viral infection or liver damage caused by drinking alcohol, or (less often) an autoimmune response. The most common hepatitis types include:

The different types of hepatitis can differ in severity. Hepatitis tends to be categorised either as acute (short-term infection) or chronic (long-term infection). People may not develop any symptoms until the liver stops working properly. Hepatitis symptoms may include:

Advanced stages of hepatitis can cause jaundice (yellowing of the skin and the whites of the eyes), swelling in the legs, confusion, and blood in stool or vomit.

Long-term inflammation of the liver can lead to liver fibrosis, which is the result of the wound-healing response to repeated injury, i.e. the liver is replacing dead liver cells with scar tissue. Excessive scarring can lead to liver cirrhosis which prevents the liver from working properly. Without interventions, liver cirrhosis may lead to liver cancer and/or liver failure. For people with liver cancer or failure, a liver transplant can sometimes be the only hope for long-term survival, as there are no available medical devices to permanently replicate the functions of the liver. 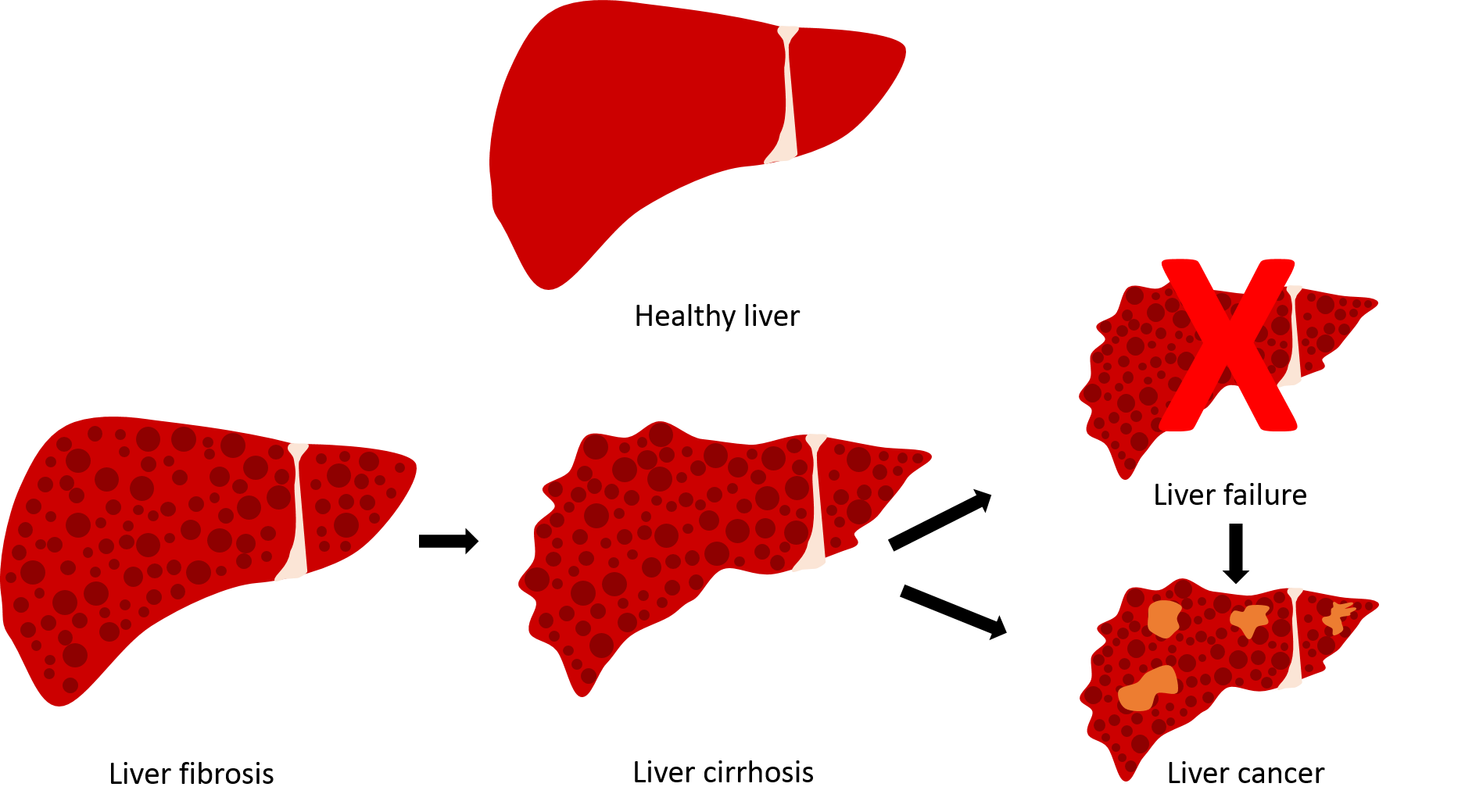 According to the WHO, ~325 million people are living with chronic viral hepatitis. 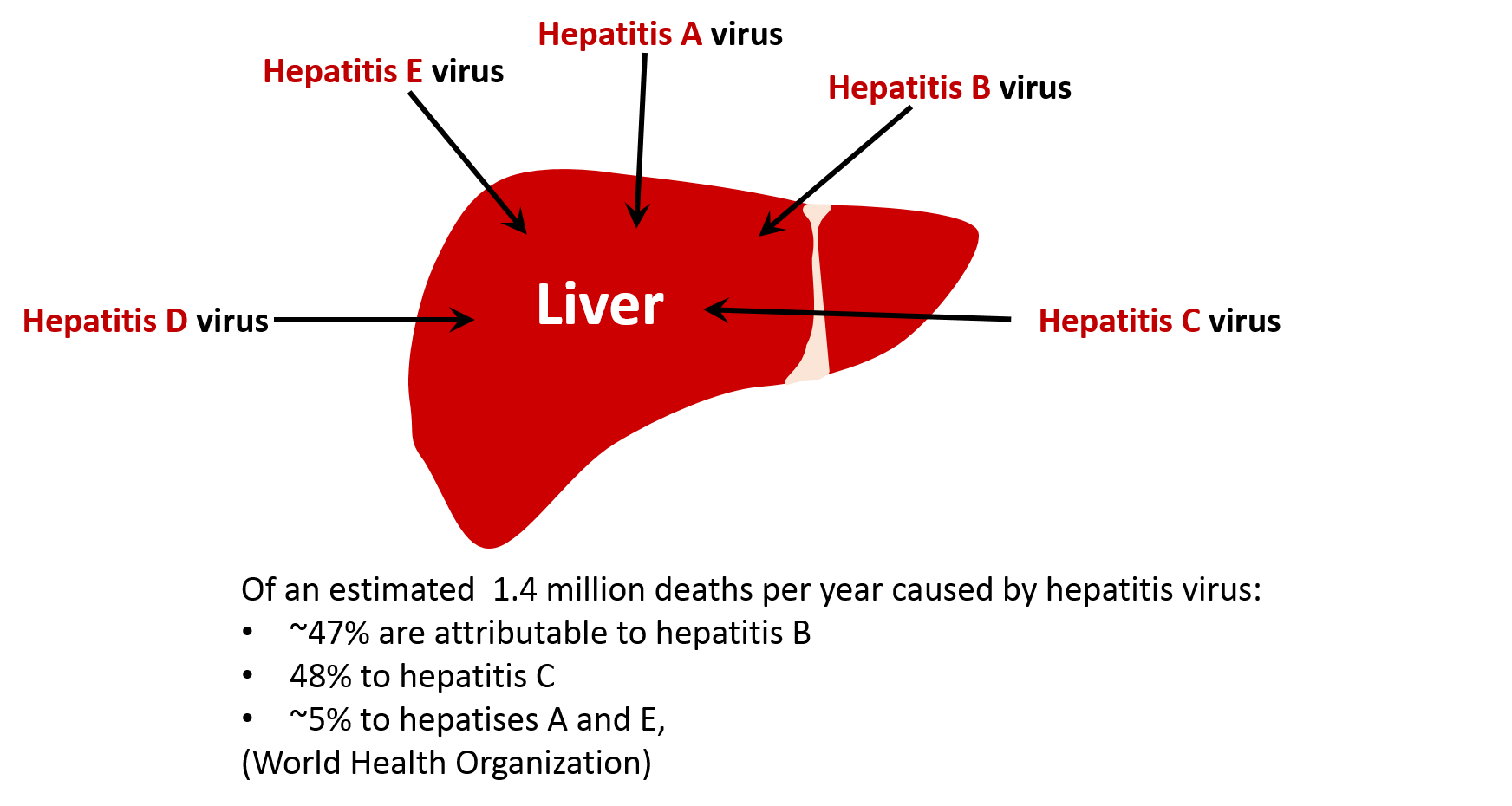 These five hepatitis viruses are often not clinically distinguishable during the acute stage of viral hepatitis. However, they do have different characteristics, such as type of transmission and incubation periods.

HAV can be transmitted through food and water that is contaminated with the faeces of a person with HAV. Therefore, transmission is associated with poor sanitation, lack of safe water, drug use, or living with or being a sexual partner of someone with HAV. Most people fully recover from HAV infection and achieve life-long immunity. However, recovery may take several weeks or months. The spreading of HAV can be reduced by:

According to the WHO, an estimated 257 million people are living with HBV. This virus can increase the risk of cirrhosis and liver cancer (also called hepatocellular carcinoma). In 2015, 887,000 people with HBV died, mostly due to these complications. HBV can survive outside of the body for at least 7 days. It is often transmitted from mother to child and via exposure to HBV-infected blood and different body fluids, such as saliva, and menstrual, vaginal and seminal fluids. People at high risk of HBV infections include:

In adults, the majority of people have an effective immune response to HBV infection, and suffer only short-term (acute) illness. Less than 5% of people may develop a chronic HBV infection. Of those chronic HBV infections, 20–30% progresses to cirrhosis and/or liver cancer. In contrast, most infants (80–90%) infected with HBV during the first year of live develop chronic HBV. HBV can be prevented with a vaccination.

While it was known for years that a pathogen other than HAV and HBV was causing chronic hepatitis, the virus itself was only discovered in 1989. Until that point, HCV was known simply as hepatitis non-A non-B virus. An estimated 71 million people are now living with HCV, per WHO. Each year, ~399,000 people die from HCV, mostly due to cirrhosis and liver cancer. Within 6 months following infection, the immune system of 15–45% of people spontaneously clears the infection; 55–85% of the remaining people may develop chronic HCV infection. The spread of HCV can be prevented by:

HDV is a satellite virus, unable to replicate in the absence of co-infection with HBV. As a result, it only affects people with an HBV infection, but it can lead to the most severe forms of hepatitis. Worldwide, ~15 million people are infected with HBV and HDV, according to WHO. A simultaneous infection with HBV and HDV is often associated with full recovery (95%). In contrast, an HDV superinfection in people with chronic HBV is often associated with a poorer prognosis. HDV superinfection can quicken progression to cirrhosis in 70–90% of people with chronic HBV infection. HDV can be prevented by prevention of HBV transmission.

The transmission of HEV is similar to that with HAV, but also includes eating undercooked meat or meat products derived from infected animals. In most cases, the HEV infection clears within 2–6 weeks. The prevention techniques are consistent with HAV. A vaccine to prevent HEV was registered in China in 2011; however, it has not yet been approved by other countries.

WHO has published data from 28 countries that show that there is a global reduction of hepatitis viruses; however, many challenges remain. The World Hepatitis Day provides an ideal opportunity to raise awareness of viral hepatitis. A short tweet might already be enough to start a conversation and thereby slightly shorten the journey to elimination of viral hepatitis.

September 21 is dedicated to raising awareness of Alzheimer’s disease, which is the most common cause of dementia.

Eye Health in the office

This week we’re focusing on eye health. Many of us spend long periods of our working day in front of a computer screen, so we’ve been thinking about the effect this has on our eyes and our health in general. This article focuses on how we can help to avoid future eye problems with some brilliant tips, like the 20/20/20 rule – take a look!