CF is a highly underdiagnosed genetic disorder which is caused by a single defect gene. This gene is important for the development of a crucial protein, cystic fibrosis transmembrane conductance regulator (CFTR).

A defect CFTR gene results in absent or faulty CFTR, which causes abnormalities in salt and fluid transport across epithelial cells. Epithelial cells are present in multiple organs, and CFTR helps to keep these organs moist by producing a liquid barrier.

Patients with CF develop many different symptoms, as the loss of CFTR affects different parts of the body:

The severity of the disease varies greatly among individuals with CF. However, deterioration is inevitable and eventually leads to death. 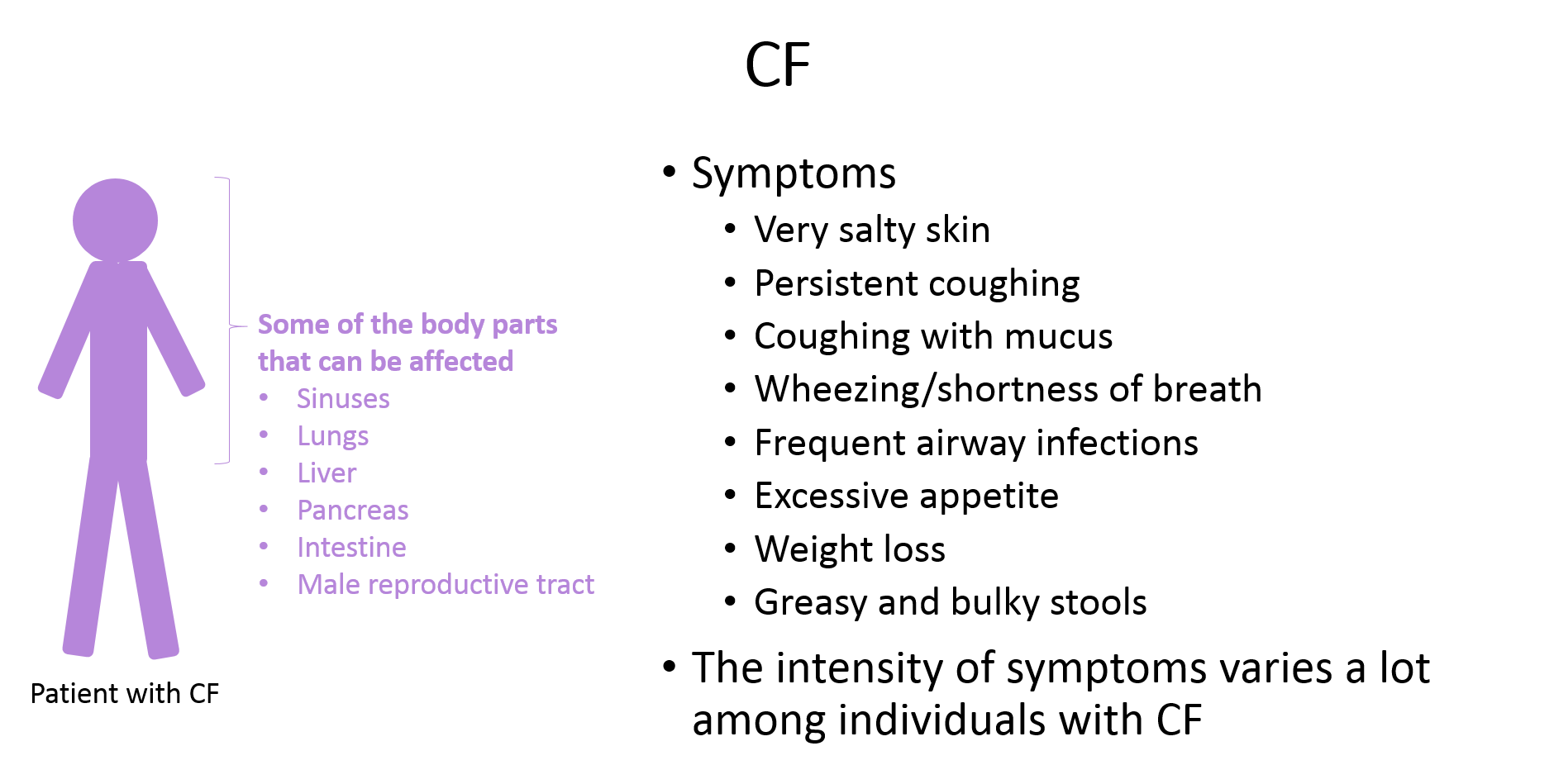 Effect of CF in the airways of lungs

The detailed mechanisms of CF development in the airways (respiratory system) remain unclear, as the function of CFTR and its interaction with other cell parts is complex. However, scientists have identified the following processes. 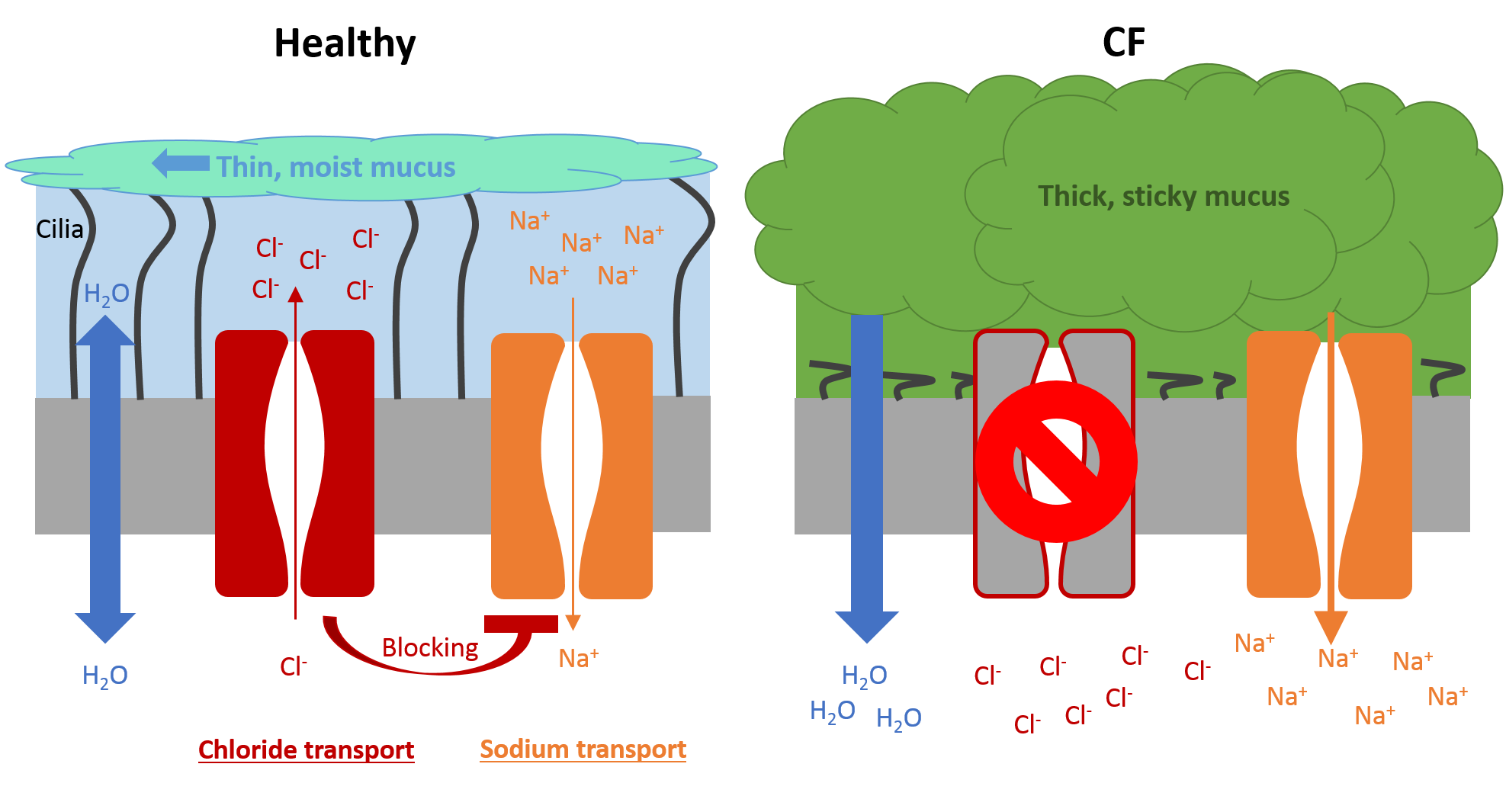 The different types of CF

Most patients with CF receive help from medical teams in specialist centres. There is currently no cure. Historically, therapies only treated the symptoms of CF (mucus, lung infection and inflammation) in order to improve patients’ quality of life. These therapies include:

More recently, therapies have become available which treat the causes of CF at the cellular level. However, due to the high number of possible mutations in the CFTR gene, these specific treatments are currently not able to help all patients. Therefore, further research is needed to treat more patients. A selection of cell-specific treatments at different stages of drug development is shown below.

In addition, different types of gene therapies are in development, and a few studies have shown promising results in patients with CF. However, current methods do not produce enough working CFTR to fully cure the condition. Therefore, more intensive gene therapies that involve either dose increase or more frequent dosing are being carefully tested. However, these approaches are not without challenges: higher doses can cause more side effects and repeated dosing can activate the immune system, thereby weakening any therapeutic effects.

Despite advances in therapies within the past few years, patients with CF still have a reduced life expectancy. Thankfully, scientists have taken on the challenge of finding a cure for CF. They are working hard to develop new therapies, a few of which have shown encouraging results and may become available for a larger number of patients with CF in the future. However, further research is needed to completely understand the mechanisms involved in CF and to ultimately find a cure for this devastating disease.

Prime Global 5 June, 2020
It was great to learn more about our brilliant team members in our US offices in our catch up with Ana. Ana talks about how she has always been interested in HR, is passionate about team spirit and how she is central to bringing people together in her role. We are so pleased to have Ana as part of our family! END_OF_DOCUMENT_TOKEN_TO_BE_REPLACED
Interview, News, Prime careers, med comms, medcomms, Medical Communications, Recruitment
Prime GlobalAn interview with Ana Agudelo, Global HR Business Partner at Prime Global06.05.2020